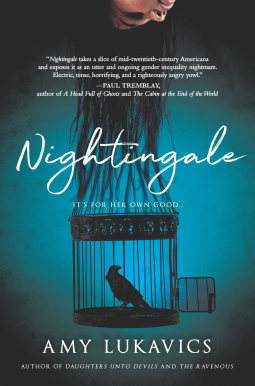 June Harding is living the life every young woman 1951 dreams of having. Her father is a successful businessman with her brother following in his footsteps while her mother is teaching her how to be the perfect housewife. There’s no pressure to do well in school because as soon as she graduates high school, June will marry Robert, the son of her father’s business partner. Everything is swell.

What June’s parents fail to understand is that she doesn’t want the life they’ve made for her. She has a passion for writing and wants to follow her dreams. If she can’t get into college, then she can at least try and get into a writing retreat that would get her away from her sleepy suburb for a few months. But it’s not just June’s future that’s at stake; her father’s business is in June’s hands. If she doesn’t marry Robert, life as her family knows it will cease to exist.

Following entering the institution after an event June can only remember splinters of, she gets swept up in hallucinations that will leave the reader wonder what is real and what isn’t. Her parents, the nurses, her doctor — every “adult” in June’s life believes she can no longer decide this for herself. What she wants, to be a writer, is ridiculous and clearly a sign that she’s lost her mind. No sane young woman would ever believe she could make a living being a writer.

“Nothing magnificent was going to happen to June in this life. To face the fact that she’d been wrong about her story was more than she could bear, and she hid the feelings from herself, stuffed roughly into the darkest corners of her mind.”

While June struggles externally with disappointed parents, terrifying nurses, mind-altering drugs, and other staples of 1950’s mental institutions, internally there’s a larger war being waged. As much as June wants to believe that she’s shed herself of every aspect of the life her parents want her to live, June is aghast at the living conditions in the asylum. From the fact that sanitary napkins are on display in a bucket to someone else making her bed, June doesn’t realize that she has become more like the young woman her mother trained her to be than she thought.  Outside, it was easy to rebel against direct orders. Inside, when given a chance to think for herself, it’s clear how deeply ingrained in her the role she’s supposed to play is. You can’t undo seventeen years of being trained to be a certain way, no matter how hard you think you’ve rebelled against it.

There are clear sci-fi horror elements to Nightingale, but for me, June’s upbringing was the most terrifying element. While this is supposed to be a look into the past, with today’s political climate it could very well be our future: to play the roles assigned to us, to ignore the keys to our own happiness, to be subservient to the men in our lives. And if we rebel? The consequences are gruesome. We take our lives in our hands. Shady medical procedures, brainwashing, not being allowed to love who we want, or think what we want, or do what we want — isn’t that the real horror story here?