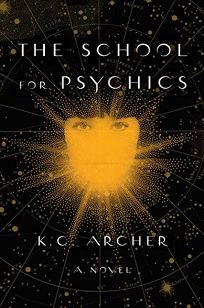 in. So when I saw the cover of School for Psychics by K.C. Archer, I assumed it fell into the same category. When I started reading it, though, I immediately realized that I was wrong. But that didn’t stop me from finishing this book in record time. While I moved away from the genres I normally love to read, School for Psychics was a fun, action-packed page-turner that has me counting down the days until the next series installment.

“Teddy Cannon was the epitome of Vegas. She’d grown up just a dozen miles away. And like the town itself, she was entirely self-invented.”

School for Psychics follows Teddy Cannon’s transition from card shark being hunted down by gangs to recruit for a top-secret school for psychics. Part privately funded, part government controlled, the School for Psychics works to train assets that will be placed in various military and government positions. Of course, that’s just what’s happening on the surface. The longer Teddy stays at the school, the more secrets–about her past and about the school–begin to surface. But her biggest challenge isn’t figuring out these secrets or acing her exams, or controlling her psychic abilities, but figuring out how to be part of a team and learning how to trust her fellow classmates. If she doesn’t, it can cost her–and her classmates–her life.

“Teddy froze. Her mind raced to calculate the odds: three Whitfield students out of a population of under one hundred, all of whom had lost their parents as infants. No, not a coincidence, not when their three names were on a list.”

What I loved about reading this book is what I loved about watching ABC’s Quantico: it was a light read, entertaining, and threw adults into a school-like setting that pushed them to their emotional and physical limits. In Teddy, we have a (somewhat cliched) heroine who is used to working alone and taking care of herself. The cast of characters is both unsurprising and eclectic: the bad boy, the eccentric hippie, the computer genius, the type-A control freak. The fact that the way they interacted could be guessed made this an extremely enjoyable, light read that didn’t keep me up all night because I was terrified, but because I was so ensconced in the story.

The School for Psychics is an entertaining read, especially for fans of cross-over Contemporary Young Adult, New Adult, and Paranormal Romance.